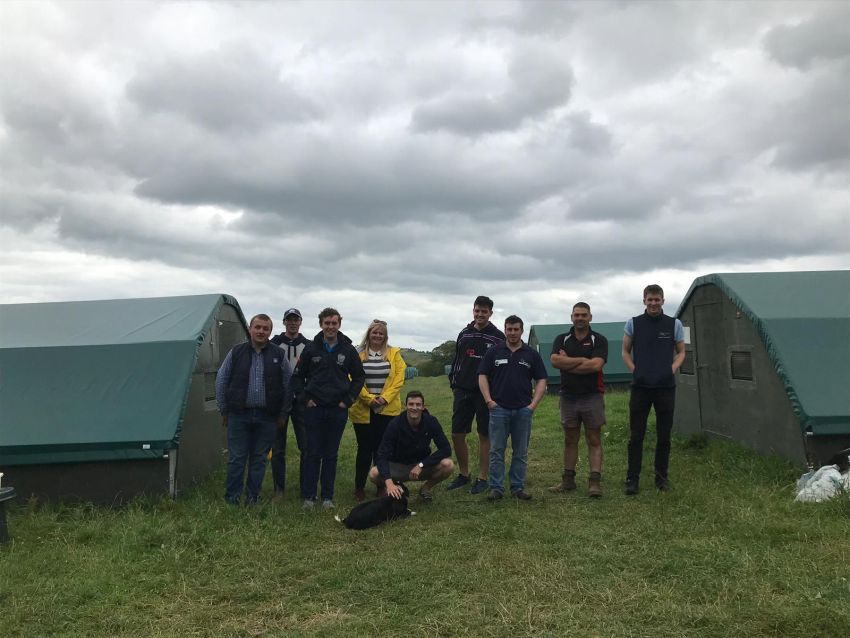 The 2019 SAYFC Agri Affairs study tour took the form of a road-trip through the West of England and Wales. From handsfree farming to coffee milk, from performance recorded ewes to 2000 cows all seven of our visits fitted with the our theme “the road to success”

The following reports provide a brief summary of the interesting, inspiring and cutting edge businesses we were very grateful to have been allowed to visit.

On the Sunday morning of our study tour we visited John and Sarah Yeomans at their farm Llywn Y Brain in Newtown, Powys. John is best known for his Farmers Weekly sheep farmer of the year award in 2018. John was also successful in winning a Nuffield Innovation scholarship in 2015 where he travelled countries like Holland, China, New Zealand and Ireland to focus on new ways of grading sheep carcasses. John’s success was evident as he showed us a PowerPoint presentation before giving us a tour around his 285 acre farm.

John was originally from Birmingham where his dad was a butcher but his father decided to move to Wales in 1973 where they purchased the 68 acre farm. John studied at Aberystwyth before returning to the farm in 1984 where there were 23 cows of which 12 were barren and the farm also had 200 ewes lambing at 90% but only eventually selling 40 lambs that year. Over the 35 years John has steadily improved productivity and output to now farm 520 performance recorded Beulah ewes and 75 performance recorded suckler cows which include pedigree Limousin’s as well crossing them to an easy calving British Blue.

The Beulah speckled face sheep are native to Wales and John uses them for their hardiness on the hills and strong mothering abilities. The family retain ewe lambs as well as selling surplus ewe lambs at Welshpool. Fat lambs are sold direct to Dunbia. An extra income for the farm also includes selling boxed beef and lamb.

One of John’s main focusses is on the health of his livestock with the strong belief that prevention is better than cure. This is evident with how closely he works with his vet and by following a vaccination plan for his stock.

John is also helping to tackle wormer resistance in sheep by not worming 10-20% of his ewes. This is based on body condition score of the ewe and if she is fit and healthy then she does not require dosing which in turn reduces his worming costs as well. John also takes faecal egg counts every three weeks to monitor worming resistance.

John and Sarah have also taken a forward thinking approach to improving their hill ground by sowing plantain and red clover. While driving up through the land and looking over the magnificent views its was clear to see how much the fields have been improved. These pastured are all managed using rotational grazing systems as well with the cattle looking tremendous on the hill side.

In the presentation John also touched on employment in the local community and agriculture by saying how he deals with around 60 firms in one year which in turn helps to sustain 2200 jobs through these businesses which is vital for rural employment.

In conclusion this was a brilliant visit with excellent hospitality where it was clear to see John and his family’s drive to improve the resilience and productivity of the business along with helping to drive the industry forward by using best environmental practices and using sustainable farming methods.

Our second visit of the day was to Tom Jones’ 500 hectare farm in Dolanog, Welshpool. Pentre Farm is a mixed hill farm comprising of 3000 ewes and 40 suckler cows. This is in contrast to when Tom came home 6 years ago where his father and him farmed 500 ewes and 70 cows. Tom decided to change the then high input system into an extensive low input system where his flock consists of predominantly 3/4 bred Cheviots put to a Romney tup. Tom also has a flock of 75 pedigree Texel ewes where he sells around 10-12 breeding tups a year, however, some of the tups are kept for his own use as well. Tom previously did a lot of contract shepherding and shearing but does not do a lot of this now and instead focussing on his farm at home.

The land at Pentre Farm ranges from 300 – 600m above sea level with the average rainfall exceeding 2000ml per year so Tom chose the Romney to suit his extensive system best. Lambing begins in March but he lambs most ewes in May to suit grass growth. Although £ per ewe is lower with a smaller breed of sheep the farm now has a bigger margin with the change to low inputs. Tom is also on a 5 year stewardship programme which has allowed him to put 3 miles worth of fencing on his land, however, this comes at a compromise with no spraying allowed on his land.

Another income for Tom is contract rearing cock pheasant chicks. Tom rears over 40,000 birds per year for 75p per bird. They arrive on his farm at 1 day old and stay for around 8-9 weeks where he feeds them and looks after them. Tom has 26 coups in the field which each hold around 1400 birds. They have access to a netted run from 3 weeks of age.

In conclusion, we all thoroughly enjoyed this visit with the highlight seeing how Tom has diversified into pheasant rearing which was unique and interesting for us to see. 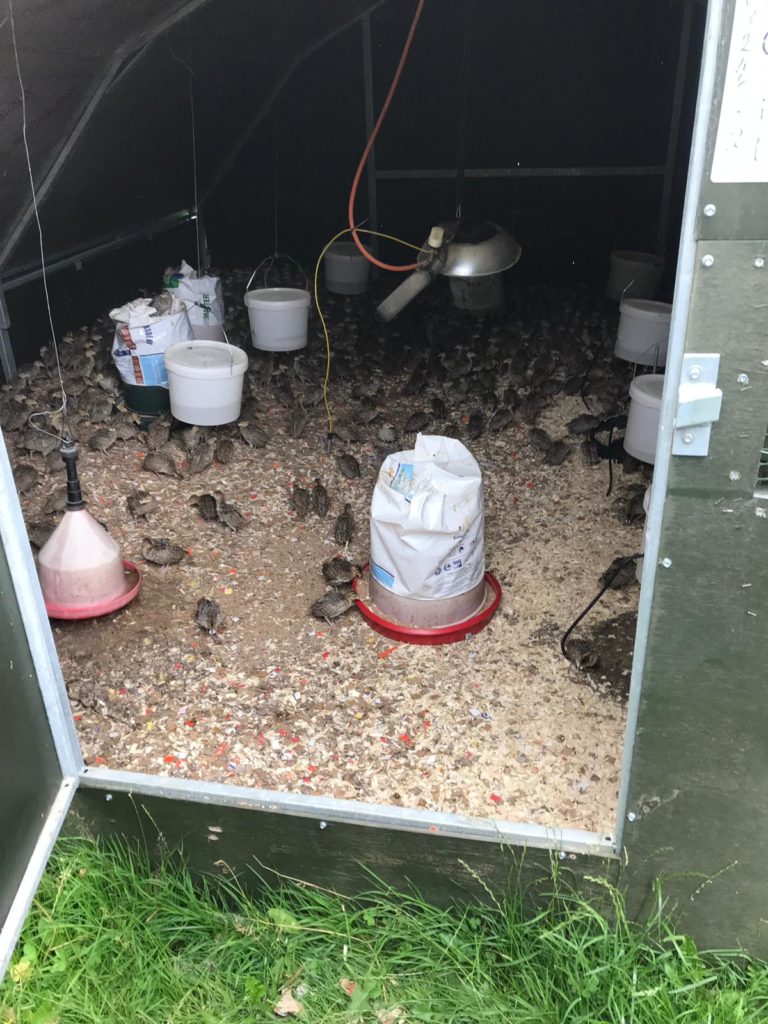