Increasing access to support for people in remote areas of Dumfries & Galloway!

The project aims to reduce stigma, increase knowledge on the issues and build capacity to deal with the issues – for the Farming Community in Dumfries & Galloway!

In 2016 the Health and Wellbeing team that is part of the Public Health Directorate in Dumfries and Galloway. Suicide and poor mental health was highlighted as being issues in the Farming community nationally and with Dumfries and Galloway being Rural and having nearly 7000 agricultural workers, including spouses and occupiers. This equates to approx 10% of the national agricultural workforce in the regional.
A Glasgow University student on placement produced a report on the background and gave use valuable baseline data on the issues being faces locally.

Some of the issues raised included:-

The official launch happened at Dumfries Show in 2017 with support from local politicians; 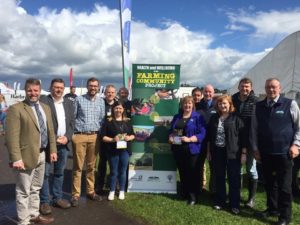 The project delivered a Breathing Space mental wellbeing event at the SRUC Barony College near Dumfries which was attended by 120 students in January 2019.

SafeTalk training has been delivered to local groups.

Healthy Working Lives workplace health presentation has been delivered to the Dairywomen’s Network as part of a regular meeting they hold.

Presentations have been made Regional Young Farmers meetings promoting local support available and asking for ideas to better engage.

A Suicide prevention video clip was produced locally with members of the local farming community and shared through social media to target different groups.