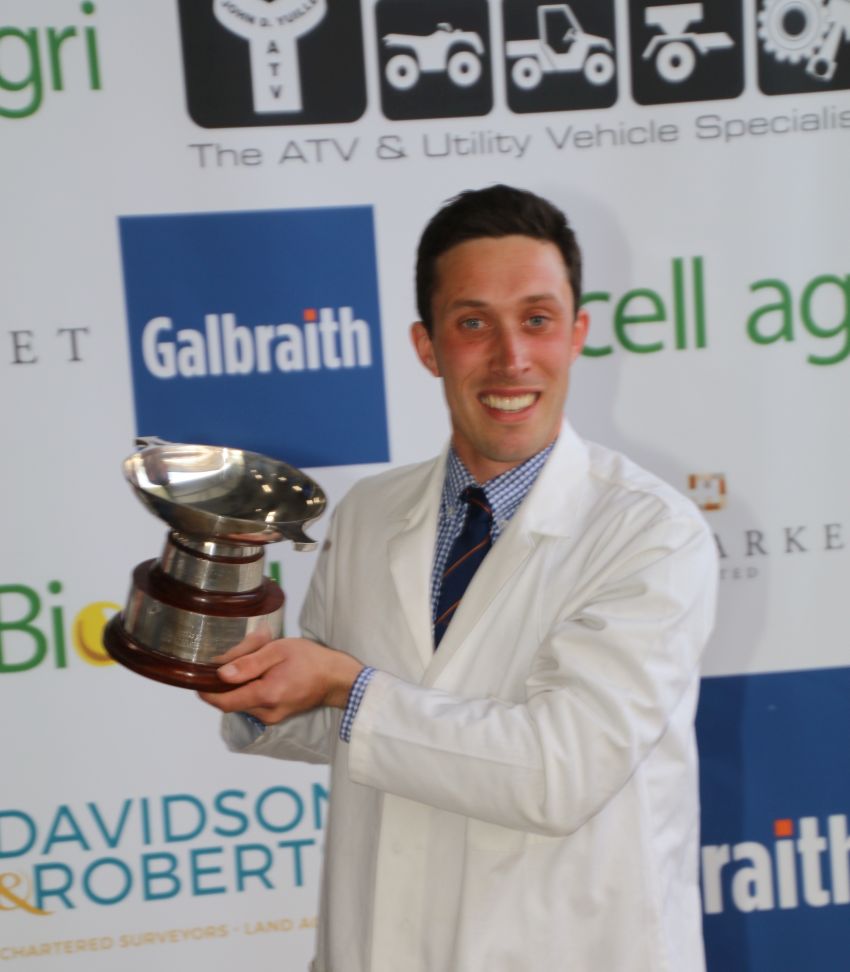 Last having a club member win the title in 1988, Carluke YFC’s past Club Chairman brings the title back to Lanarkshire for the third year!  Scott accomplished the day of judging with a colossal score of 620 in the afternoons sought after Stockman of the Year.

Alongside his fellow 17 finalists, Scott undergone an extremely high tension afternoon of presenting demonstrations on cattle and sheep, plus writing up and delivering sets of reasons to 2019’s judges within the cattle rings. The breeds in which the competitors had to deliver on in the afternoon session were the Blackface and Charollais sheep, Ayrshire and Holstein dairy cattle and the Limousin and Angus beef cattle.
2018’s runner up of Young Farmer of the Year and now Stockman of 2019 – Scott commented;
“Like most, I’ve attended practices for this renowned and prestigious competition for over 10 years and this goes to show the true dedication and determination that members pour into it!
I can’t thank the trainers and those who help to pull it all together enough – long may this legacy live on and I feel overwhelmingly privileged to win in such a historic year for the event”.

Pipped at the post was 2018’s Young Farmer of the Year Andrew Neilson of Avondale YFC gaining 613 points followed by James Graham of Stirling, Strathendrick & Strathkelvin YFC continuing his time at the top with a score of 610.
SAYFC are proud of 2019’s competitors in their months of dedication to prepare and practise, showcasing their stock-judging skills at the premiere fixture in Scotland’s farming calendar!
Ranking both sheep and cattle on various criteria and providing reasons for their choice to independent judges draws the crowd and visitors each year from across the country, uniting rural communities and showcasing top-class agricultural expertise.

Biocell Agri demonstrated their support for the pinnacle ‘Stockmanship Programme’ as new sponsor in the competition’s 50th anniversary year! SAYFC’s partnership with Biocell Agri is invaluable in providing members the chance to participate in competitions that contribute to their ongoing personal development. The Stockmanship Programme at the Royal Highland Show is one of the pinnacle events in our yearly calendar. The skill and dedication that goes into practising, along with the association of Biocell Agri, means winning a trophy comes with great prestige.

Alec Ross of Biocell Agri explains why support for young farmers is so important to them;
“It has been an honour and privilege to sponsor the SAYFC stockjudging for 2019 and hopefully in the years to come – particularly as we have begun our involvement on the fiftieth birthday of the first competition and how fitting it was to meet both this year’s winner and the inaugural champion from 1969 – as well as the daughter of the man whose trophy these young folk compete for. It was truly a moving occasion.
Competing at anything is hard. Whether it’s showing stock, shearing, or indeed stockjudging – these young farmers are putting themselves in the public eye and out of their comfort zone – in the knowledge that they might fall just short! That takes real bottle, and is in itself a terrific achievement. My respect for the field, whether they won or not, is therefore infinite – and their professionalism and character makes me certain that the future of our industry is in great hands!”

SAYFC’s 50th Anniversary of the competition drew past winners and those placed top over the years, to the Young Farmers Centre for a celebratory reception with founder of the Stockmanship Committee, Mr Alistair Borthwick of Ayrshire addressing the group and toasting a celebration of their achievements.

SAYFC would like to thank everyone who took the time to help sponsor, score and steward not only the Stockmanship Programme but the national competitions across the renowned week of activities. These events and competitions are a highlight in the calendar for many members of the SAYFC!