If you want to change the world, Start at home!

Home > National  > If you want to change the world, Start at home!

17 Feb If you want to change the world, Start at home!

Posted at 12:07h in National by janelle3sayfc
0 Likes 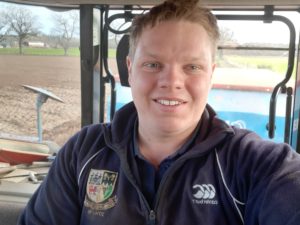 Crawford McLaren is the current Chairman of Strathearn JAC and is part of the Agri and Rural Affairs Committee. He works on the Family beef and arable farm near Crieff.

If you want to change the world, Start at home!

During the past year amid this Pandemic, one of the major things I think everyone has learned is that Local is King. Whether that be buying from your local small retailer to support them or just realising how beautiful a country we live in. Waiting to be explored by its own inhabitants.

When you stay local you can reduce your carbon footprint at the same time. Visiting new places at home rather than jumping on a plane for a sunny holiday. Being carful as to what food you are buying, making sure it has not been flown or shipped from the other side of the world.

The vegan community have chosen possibly the worst month to promote their message of a lower CO2 diet. In the winter months as part of a balanced diet, eating meat produced on the grasslands of Scotland, being slaughtered and butchered often only miles from the original farm can be sold with a much lower carbon footprint than asparagus grown in – and flown from –  Argentina.

Eating seasonally is a fantastic way to keep a balanced diet and keep your impact on the environment to a minimum. Eating the correct veg at the correct time for its season is so important. In the UK we produce some fantastic fruit and veg all year round. Asparagus, Broccoli, cauliflower, strawberries and raspberries, tomatoes to name but a few grown in the summer months and harvested into November. Not to forget about our winter veg including carrots, potatoes, turnips, Brussels sprouts all either coming from short term storage or out of the ground a day before they are on the shelf for you to buy.

The Greenhouse gas released by livestock has been miss-calculated up till now. The methane that Ruminants release is what is called a flow gas. If a stable herd size is maintained (nationally) then the climate warming impact of the methane released by the growing ruminants is similar to that captured by the growing of grass and cereals for their feed. Coupled with the addition of less tillage every farm in the UK could be carbon negative.

Livestock are becoming more efficient through selective breeding with the national herd size dropping with the same tonnage of meat being produced. The national herd has been dropping consistently by over 1% per year for several years. More efficient cattle and less methane being emitted will lead to reducing greenhouse emissions from the UK herd.

So if you would like to start to change the world and the CO2 level either Globally or more Locally, look more closely at where your food comes from, and ends up.

Check the label and make sure your food was grown as local as you can buy. Not shipped half way round the world.

Reducing your waste at home is one of the best, but least spoken about, ways to reduce your carbon output. In this country we waste almost a third of all the food that is bought. By reducing food waste we not only save the carbon from production but avoid further carbon release from the degrading waste. While you are saving CO2 emissions you are also saving money.

When you are out on a walk around the countryside take note of what is grown on your doorstep. Ask a farmer to tell you about what they do, how they do it and why they do it. Every farm is different and so interesting.

This year Open Farm Sunday is being held online and throughout the year with the first date on the 28th of March. RHET (Royal Highland Education Trust) and RNCI (Royal Northern Countryside Initiative) have fantastic online portals for teachers and parents to tap into for presentations, handouts, activities and links to support for delivering lessons on food and farming. Please get involved, whether it is part of home schooling, or to just further your own knowledge of what Scottish agriculture is all about.