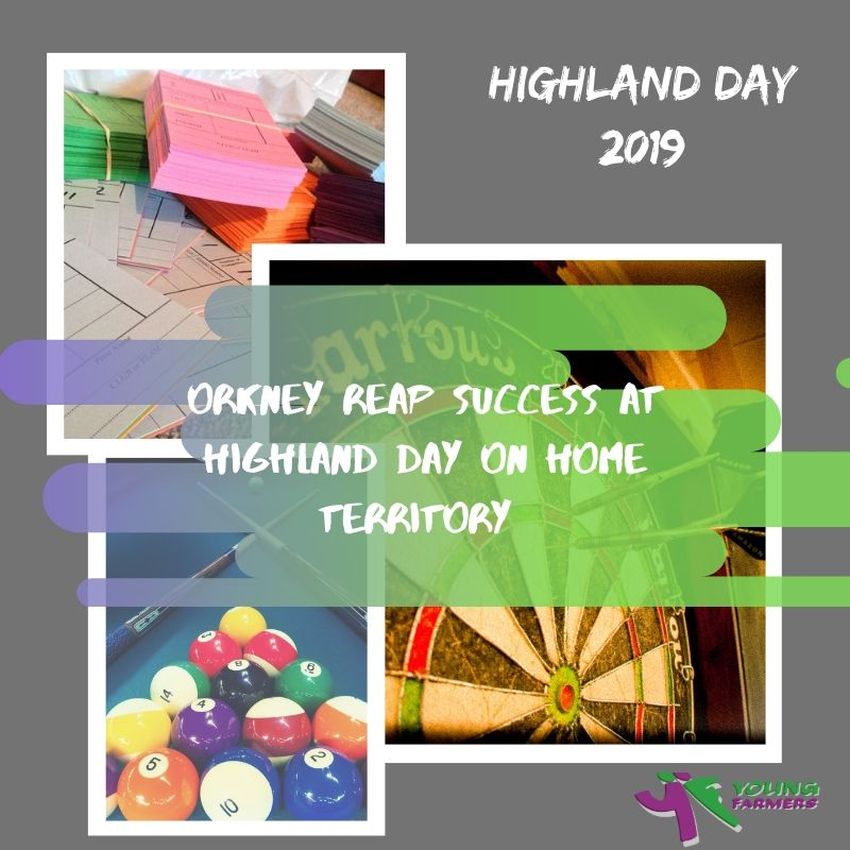 Saturday 19th October saw the Highland Area Young Farmers Clubs (RNI, Caithness, Orkney and Shetland) coming together for the Annual Highland Day, which consisted of Stock judging, Pool and Darts Competitions.  This year the competition was held in Orkney for the first time.

The day saw 6 clubs from within the Highland Area take part, only one member from the RNI District competed and that was Sarah Mowat from Ross Sutherland, only 1 of the 4 Caithness clubs made the journey across the water to compete during the day, it was great to welcome Shetland down for their first North Competitions, with thirteen members make the journey.  All 3 of the local clubs in Orkney (Harray, Sandwick and East Mainland) took part in all 3 of the competitions.  Special mention to NorthLink Ferries for giving support to those travelling to Orkney.

The Stockjudging started the day at the Orkney Auction Mart by kind permission of the Mart, there were 4 classes of stock for judging, 2 cattle classes class of Charolais Cattle from WR Baillie and a class of Commercial Cattle from JS Baillie and then 2 classes for sheep, Texel’s from Garth Flett and North Country Cheviots from Alan Smith.  Judging the cattle was Gareth Wood and the sheep Iain Laird.  The top six teams (one member from each team, teams were made up of 3 members) went forward for reasons giving on the Texel Sheep class and the top 12 individuals gave reason the on Commercial Cattle class.

Stockjudging scores are at the foot of this news page.

We would like to extend our thanks once again to The Mart, our Judges and donners for making the Stockjudging possible and of course to our competitors as without them were would be no competition.

The evening saw the clubs compete in the Standing Stones Hotel in Stenness at double’s pool competition and singles darts competition, we had a great entry in both and a fun evening was had by all, thanks to Linda and her team at the hotel for hosting.

In the pool they played in a league system of 3 leagues and then knock out after that, there was some great games played by all and a great sportsmanship throughout the competition.  The winners on the night after a best of 3 match was Harray’s Andrew Clouston and Susie Manson, taking 2nd was East Mainland’s Sean Stanger and George Low and 3rd was Sandwick’s Ryan Kemp and Garry Mathers after the 3rd place play off with Magnus Walker and Cameron Drever from East Mainland.

The Darts was played in 3 leagues a junior league and 2 open leagues, with then finals being held after with the top placed teams from the open leagues competing.  The junior league was won by Andrew Seator from Harray, 2nd was Lee Rendall from East Mainland and Sandwick’s Gary Isbister came 3rd.  The Open League was won again for a 2nd year running by East Mainland’s George Low, 2nd was fellow club member Sean Stanger and 3rd was Sandwick’s Tommy Linklater.

Once again we would like to thank the Standing Stones Hotel for hosting the competition and to all those who took part.

North Area Vice Chairman Gemma Duguid said “A fantastic turnout of 60 people participated in the Highland Day.  A very high standard of Stockjudging was seen and with the Shetland YF having their first shot of reasons.  Pool and Darts was a great success and everyone had a very enjoyable day!  Well done to all the members!”

OVERVIEW OF RESULTS FROM THE DAY

Stockman of the Day