Posted at 12:30h in National, Uncategorized by janelle3sayfc
0 Likes 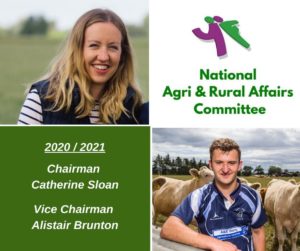 The National Agri & Rural Affairs Annual General Meeting took place on Sunday 4th May. Andrew McGregor completed his year as Agri & Rural Affairs Chairman handing over the reins to Catherine Sloan (Bankfoot) with Alistair Brunton (East Fife) being elected new Agri & Rural Affairs Vice Chairman. The AGM was held by Zoom Meeting call due to the ongoing restrictions which have seen many changes in the Young Farmers calendar recently. The call allowed representatives from all three regions to participate in the meeting.

The three Regional Agri Chairmen that have been elected for the year ahead are: North Region, Amy Reid (Udny) East Region, Daniel Fleming (Forfar) and West Region, John McCulloch.

Other elected committee members are as follows:

Congratulations to all who have joined the committee and we look forward to the year ahead.